This is the site of the Lapland District of the Communist Party of Finland.

The street address (and post address) of our office is

Our e-mail address is: skp.lappi@gmail.com

RESOLUTION OF THE NORTHERN ORGANIZATIONS OF THE COMMUNIST PARTIES OF FINLAND, NORWAY, DENMARK AND RUSSIA

We, the Northern organizations of the communist parties of Finland, Norway, Denmark and Russia have discussed the current issues in Inari, Finland during the traditional Calotte conference on the 1st and 2nd of June 2019. We have agreed on the following resolution.

The report of the Intergovernmental Panel on Climate Change (IPCC) on November 2018 highlights the importance of the containment of the climate change. It is especially important in the Arctic, where the warming is strongest and where the results of the warming are significant. We demand that the countries in the Arctic – and also other countries – take measures to stop the warming of the climate. Especially we demand this from the United States of America, which prevented the declaration about climate change in the meeting of the Arctic Council in Rovaniemi on the 7th of May 2019.

In addition to the warming of the climate we emphasise the importance of the protection of the environment on the vulnerable Arctic region. Fishing, production of oil and gas, mining, industry, traffic, use of forests, tourism and other activities, which have effect on the environment and on the use of the natural resources, must be carried out in a way which is not harmful to the environment. It is possible only when resources belong to the people (to the state, to communities and cooperative organisations). It is also important to respect the rights of the sami people living in this area.

In addition to the environment, another essential question is the increase of the military tension in the Arctic region. The United States of America and NATO have intensified their presence in the Arctic. Although Sweden and Finland are not members of the NATO, in practice they take part in the activities of NATO. More and more and larger and larger military exercises are arranged on the Northern areas of Norway, Sweden and Finland with the participation of USA and NATO. The arrogant statements of the Foreign minister of the United States in the recent meeting of the Arctic Council in Rovaniemi add to the tension in this area. Instead of confrontation, we demand peaceful and mutually beneficial cooperation between the countries of the Arctic region. We demand the abolition of sanctions against Russia.

We demand that the military activities must be stopped in the Arctic. The aim should be to have in the Arctic similar international agreement, which was accepted already in 1961 for the Antarctic. After that only peaceful activities, which take into account the environment, are possible.

Lapland region of the Communist Party of Finland

Troms and Finnmark region of the Communist Party of Norway

Murmansk region of the Communist Party of the Russian Federation

The attack of the employers must be stopped

The conservative policy of the Finnish government has encouraged the employers to demand significant cuts to the wages and other benefits of the workers. At this moment it is most clearly seen in the Finnish Post because of the ending of their previous collective agreement.

The employer organization of the Post demands significant cuts to the wages, worsening of the system of shift working and less compensation for the workers losing their jobs. In addition the employer wants to use much more temporary workers hired from outside.

The arrogance of the employers is seen in their plan to employ temporary workers already before the possible strike as strikebreakers. The employer has demanded that the permanent workers must train the temporary workers to do their work during the possible strike. The employer has however now backed off from this demand. The arrogance of the employer may also be a bit mitigated due to the decision of the Council for Mass Media. The council decided on the 19th of November that the warning given by the employer to the shop steward of the Northern area of Post was not appropriate. Reason for the warning was an interview of the shop steward he had given to the newspaper Lapin Kansa. In the interview he discussed the current problems of the Post.

The workers of the Post are now in the first line of the attack of the employers. If the employers now succeed in their plans, it will surely result in the worsening of collective agreements also for other Unions. Therefore all support is now necessary for the Post Workers Union. 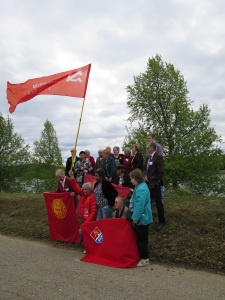 The eight conference of the Northern organizations of the Communist Parties of the countries in the Arctic region was held in Ivalo, Finland on 12th to 14th June 2015.

Traditionally the Northern party organizations from Russia, Finland, Sweden and Norway have participated in the annual meetings. This time also representative from the Communist Party of Denmark was present. Although Denmark itself does not belong to the Arctic region, Greenland (which belongs to Denmark) ja very much part of the Arctic.

The discussions dealt among others with the activities of the parties, environmental problems and the increased activity of NATO in the Arctic (see declarations). 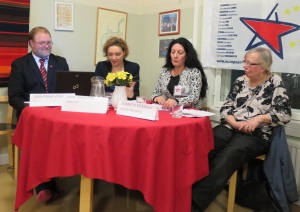 The Communist Party of Finland arranged international discussions on women’s rights in six towns. One of the discussions was in Kemi on the eve of the Internetional Women’s day on the 7th of March 2015.

We sell the Communist weekly Tiedonantaja every week in some part of Lapland. Here are activists Raija and Kaarina in Kemi on the 9th of January 2015.

On the 8th of December 2014 we celebrated the 70 years of the Lapland district of the Finnish Communist Party. 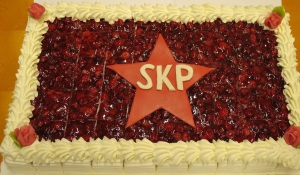 Big cake for the party.

This site uses Akismet to reduce spam. Learn how your comment data is processed.